MY REVIEW: Smokescreen By Khaled Talib 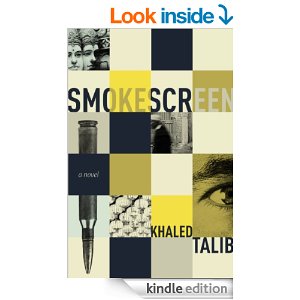 The scene of the story is set in the Island of Singapore, where the Israeli government are seeking to put an end to the Palestinian conflict; however several Israeli officials want to kill their own leader and plan to assassinate him by framing an innocent reporter called Jethro Westrope, commonly known as Jet West, who works for the country’s leading lifestyle magazine.

Jet initially thinks that one of the men that is chasing him is the husband of the wife he has been sleeping with and has no idea until Niki Kishwani, a public relations manager of the Singapore Tourism Board tries to warn him that there are some men who are following him and want to fame him for the murder of an important person. Jet finds himself in a situation where he is being chased by Chan’s henchmen while at the same time trying to clear his good name as Yung kills Niki, in an attempt to set Jet up for the murder. Jet is forced to go into hiding and meets Michael Dexter, who offers him refuge in his mansion. Michael encourages Jet to contact Nikis best friend, Nicole Wong and convince her he didn’t kill Niki, and that’s when even more dangers await as Jet goes from one threat to yet another and the smear campaign to make him a scapegoat for further murders only multiplies as the dead body count increases.

Will Jet be able to clear his name in time before he is framed for the Israelis Prime Minister premeditated murder, or will Chan and his men achieve their ultimate mission that will in effect change the course of all their paths?

Chan Boon Seng – Chief protocol officer of the Singapore Ministry of Foreign Affairs. Characteristics – A big brusque man who doesn’t care if people like him or not, black eyes, black hair that’s shaved along the sides, streaked with white sleeked back. A graduate from the London School of Economics, exceptional military career, rising to the rank of Colonel, trained by the Israeli army.

Captain Eli Aviram – A tall lean man in his forties with a thin scar across his left cheek, Chan’s long time Israeli friend.

X – An old mysterious man, a former Israeli spy who is now a military consultant.

Niki Kishwani – Public relations manager of the Singapore Tourism Board, age 28, a law graduate from a local university, a covert operative for Chan, a double agent.

Mary Yeo - Niki Kishwani assassin. Yung murders her in cold blood in a church she was seeking repentance.

Yung – A remorseless assassin, who was sentenced to a mental institution for observation and then to be hanged. Chan paid for his freedom after Yung had spent two years in prison, in return Chan expected absolute loyalty. A special operations force solider gone wrong, trained in counter-terrorist actions.

Michael Dexter – United States Ambassador to Singapore, a CIA official, his specific mission is to save the Israeli leader from assassination.

The dialogue is natural and flows well throughout the whole book with no signs of forced and unnecessary speech patterns with little or no reference to the use of profanity.

Smokescreen is undoubtedly one of the best written espionage thrillers I have had the honour of reading. I have read numerous spy novels but this book is in a league of its own as one of the greatest fast-paced, gripping and thought provoking plots that involves high-level politics, government cover-ups, covert missions and a high pursuit chase of an innocent man trying desperately to prove his innocence.

Khaled Talib is a master of depicting real life scenarios such as the current connections between Israel and Singapore into a work of unforgettable fiction that will leave you breathless and wanting more. I highly recommend this book to readers of Robert Ludlum and Tom Clancy.

Oops, you forgot something.

The words you entered did not match the given text. Please try again.

Reply Gabrieldeela
1:41 AM on October 4, 2020
Dream consistently receive a stable income on the auction and make less mistakes?
Introducing To your attention http://gary.biorobot.xyz - site for automatic investment in profitable positions on the exchange. For a successful start, register in the system and after making $ 300 on a deposit, start making profits using artificial intelligence .
Want to win more? Take risks and get profit faster than others. Flexible configuration of the robot will you every day to receive income from personal capital. Invest your money wisely!

Reply Gabrieldeela
6:57 AM on December 18, 2020
https://bit.ly/3pqNrie - Meet, be inspired, communicate and continue flirting! Follow the link

Over the years of independence, the institute has trained more than 13000 physicians (including 800 clinical interns, 1116 masters, 200 postgraduates and 20 doctoral students) in various directions.

The institute has been training medical staff on the following faculties and directions: Therapeutic, Pediatric, Dentistry, Professional Education, Preventive Medicine, Pharmacy, High Nursing Affair and Physicians??™ Advanced Training. At present] 3110 students have been studying at the institute (1331 at the Therapeutic faculty, 1009 at the Pediatric, 358 at the Dentistry, 175 students at the Professional Education Direction, 49 at the faculty of Pharmacy, 71 at the Direction of Preventive Medicine, 117 ones study at the Direction of High Nursing Affair).

The clinic of the institute numbers 700 seats and equipped with modern diagnostic and treating instrumentations: MRT, MSCT, Scanning USI, Laparoscopic Center and others.

There are all opportunities to carry out sophisticated educational process and research work at the institute.